Close Menu
Swaha Productions is thrilled to welcome Sean Johnson and the Wild Lotus Band back to Atlanta this weekend.  In conjunction with Southeast Yoga Conference and Chantlanta, the band will be performing a concert this coming Saturday night October 5th, followed by Sean’s Bhakti on the Mat class at the conference Sunday afternoon.  Local artists Blue Spirit Wheel will open the concert at 7pm Saturday night.
All registrants of the 2013 Southeast Yoga Conference (whether for individual workshops, a day or weekend pass, and/or the symposium) may purchase up to two discounted tickets to the Sean Johnson and the Wild Lotus Band’s Saturday night kirtan for $15 each. Tickets are also available at Swaha Productions for $20 in advance or $25 at the door. The event will take place at the Druid Hills Baptist Church in the Poncey-Highland neighborhood, inside the Social Hall. Parking is plentiful and free.
My personal experiences with the music of Sean Johnson and the Wild Lotus Band – as well as Sean and the band itself – is really awesome.  I love sitting with the variety of the moods that their songs bring.  There is a deeply meditative flow in songs like Om Hari Om, and get up off your feet feelings with Jai Hanuman/ Ram Sita Ram. 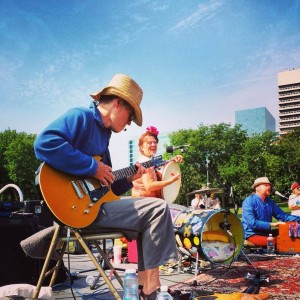 With Sean himself, sitting in front of him to chat or sing along… it is truly connecting, human, and genuine.  He totally brings a sense of peace, safety, no false pretenses.  In other words, you can be yourself with him because he gives himself that permission as well.  This is tangible and it is a mark of credibility with me.  In the yoga class environment, Sean as a teacher gives you that same permission again, for you to totally be where you are in your practice.  He makes it really fun, enjoyable, and the music simply adds a great depth to the experience.

New Orleans mantra musicians Sean Johnson and The Wild Lotus Band, (Alvin Young and Gwendolyn Colman), are celebrated as one of the leading voices in western kirtan music, known for their dynamic sound that merges mantras, rock, funk, and world grooves. The band is a favorite headliner at festivals and conferences worldwide and they are the first kirtan band to ever play The New Orleans Jazz Festival. Their music has appeared on Nettwerk/Nutone Records, White Swan Records, Sounds True, and Putumayo World Music. The band tours the U.S. and abroad playing music festivals, yoga studios, retreat centers, concert halls, and celebrations year-round.

Vocalist and harmonium player Sean Johnson is the founder of the band. He’s been leading kirtan for the last fifteen years. His voice is equally influenced by his roots in New Orleans, vocal exploration of his ancestral Irish heritage, as well as study in Indian vocal music and love of the path of bhakti yoga– the yoga of the heart. Sean is also the founder of Wild Lotus Yoga studios in New Orleans, and Soul School, an interdisciplinary yoga and spirituality teacher training program that focuses on teaching yoga with imagination. He has a Master’s degree from The Naropa Institute with a focus on teaching chant as spiritual practice, is a Yoga Journal contributor and presenter, and is the co-curator of Putumayo’s music for yoga series. Sean shares the practice of mantra in an inviting and accessible way that taps into the universal spirit of life and music- weaving stories, myths, and poetry.

Alvin Young….Bass and guitar player and New Orleans’ native Alvin Young spent years on the fabled Crescent City music scene playing with Wynton and Branford Marsalis, local legends James Booker and James Black and many more. His voice on bass and guitar weaves the jazz, rock, classical, and folk styles he’s been immersed in for the last 35 years. The hallmark of Alvin’s expression on the bass is a rare and deeply melodic quality that illuminates the trio’s sound. Music has been a pivotal part of Alvin’s spiritual journey. Alvin has also been invited by many kirtan artists to play bass and guitar including Girish, Shantala, David Newman, Luna Ray, Prema Hara, and Gina Sala. 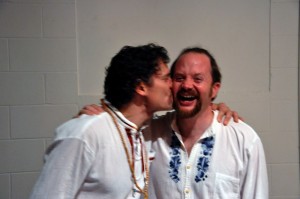 Gwendolyn Colman….Percussionist and singer Gwendolyn Colman brings a unique ethnic sound to the band with years of experience drumming with middle eastern ensembles, flamenco troupes, and avant garde bands. Her ‘ride’ includes frame drums, cajon, high hat, kick drum, doumbek, and karkobs, playing with merging ancient rhythms with a modern, urban flare. Gwendolyn can move seamlessly from a traditional middle eastern trance rhythm, to subtle jazz brushwork, to a New Orleans hip hop street groove. Her powerful vocals are influenced by early opera training. Gwendolyn’s spiritual quest has led her from Rastafarian to Baha’i to yoga – with the heartbeat of her drum always at the center. She is also a flamboyant visual center piece to the band, with her trademark Wild Lotus flower that is always in her hair.  Gwendolyn totally brings the “WILD” to the rest of the Lotus Band.
New Orleans mantra musicians Sean Johnson and The Wild Lotus Band (Alvin Young and Gwendolyn Colman) are celebrated as one of the leading voices in western kirtan music, known for their dynamic sound that merges mantras, rock, funk, and world grooves. The band is a favorite headliner at festivals and conferences worldwide and they are the first kirtan band to ever play The New Orleans Jazz Festival. Their music has appeared on Nettwerk/Nutone Records, White Swan Records, Sounds True, and Putumayo World Music. The band tours the U.S. and abroad playing music festivals, yoga studios, retreat centers, concert halls, and celebrations year-round. More about Sean here.
Sean Johnson and the Wild Lotus Band has been written up or talked about in several magazines from L.A. Yoga to Yoga City NYC, from Jai Uttal to the Elephant Journal.  Here are two of my favorite quotes from others:
“If you think that a kirtan is a pious sit-still event, you have obviously not heard Sean Johnson and the Wild Lotus Band! A very wise man (George Clinton) once said, “Free your mind and your ass will follow.” Sean, Gwendolyn and Alvin have taken those words to heart and bring a little soul to some amazing bhakti (devotional) music.” – Lisa West, Elephant Journal –
“Truly an awesome experience! – a musical gumbo to stir your soul. Sean has the voice of a deva, an angel – and the band is full of swing, soul, rock, jazz and healing vibrations.” – Saul David Raye, founder, Sacred Movement, L.A. –
Much Love & looking forward to seeing you all there!
Who am I, and what is Swaha Productions? I’m Stan Holt, a name and collection of titles, roles, even actions that I used to think define who I am. They do not. I – and you as well – am something beyond words in physical form. We all are. Feel free to meditate on that. You’ll like it.

Universal Truths aside, I am also the Creator and Dream Keeper of Swaha Productions. My mission statement reads as “Reaching inward and outward, to grow the kirtan and yoga communities, to share in the Bhav”. I hold myself to that by reaching inside first, asking, “What is it I can do for these things that I have a passion for? How can I be of service to something that is bigger than me? How can I do both, bringing them together?”
Swaha Productions was created in July of 2011, and had its first event in April of 2012 with about 12 people and the awesome kirtan band from Athens, Rahasya. Things have snowballed since then, with killer kirtans that include all the local Atlanta kirtan bands and national touring artists like Girish, David Newman & Mira, Sean Johnson and the Wild Lotus Band. 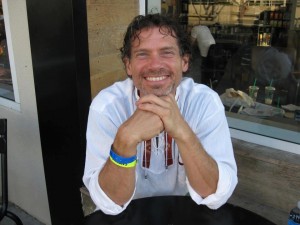 Those other titles & roles I mentioned…I love nature, 4 legged friends, I’m a massage therapist, an energy healer. I deeply enjoy meditation & music, dancing, and learning how to be a better spiritual being immersed in my humanness. My goal in that is to further eradicate the lines between what is spiritual and what is human. Because its really all the same, and our path is to evolve, always.

2 Responses to “Sean Johnson at the SE Yoga Conference, by Stan Holt”