How deep can you go when you get off the mat and into the pool?

Years ago, when I was doing an intensive workshop with Eric Small on Yoga for MS, he told us that when he was younger and found it difficult to practice yoga on a yoga mat because of his flaring MS symptoms, his then teacher, B.K.S Iyengar, told him to take his asana practice into the pool. 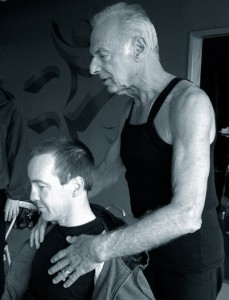 Eric Small working with a student

What a shame that this insightful “seal of approval” from the master yogi himself is largely unknown.

Imagine all the people who at this moment in their life, because of injury or illness, could potentially find yoga accessible if they were to transfer their practice into a pool environment.

Asana or yoga poses as I have been taught by my wonderful teacher Kim Schwartz, is a pranic model, and so the non-yoga aware world needs to be educated in this, because they have an opportunity in finding greater balance in their lives on more than just a physical level. Definitely if the student is in pain, then that can be a huge distraction of the mind and that needs to be addressed first.

When the student is pain free for the first time, perhaps in year,s as was the case with Rosie, one of my students with fibromyalgia, they will be open to the many other ways that the science of yoga, rather than just yoga asana can help to improve their lives. Check out this video. 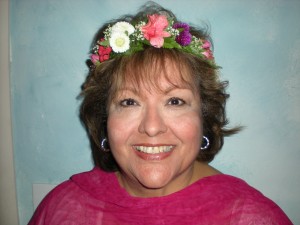 Gravity has a habit of compressing the spine throughout the day and so it is really important for us to try and become more aware as we function through the physical vehicle, in the same way that we need to be aware when we are driving a car.

Mystically speaking, the “party is in the spine”, in terms of where we are concentrating our energies, inward and upward to self awareness, and yet, we need to get to the spine via the major joints of the body. If a student has rotator cuff injury, then range of motion will typically be painful, and it would not be prudent for a student to force extending her arms overhead. Time spent in loading the joints first, such as in wall plank can help the student to experience what is happening to the skeleton and the muscles, as she bears weight in the arm bones, and can experiment with her hand positions.

In these photos, for example, a new student can feel experientially more of a bias to the armpits deepening, the rib cage opening, or the shoulders and shoulder blades moving down the back, releasing the neck. After the weight bearing enquiry, she can them move on to exploring her range of motion using the damaged shoulder as a teacher and reference point for the healthier side. 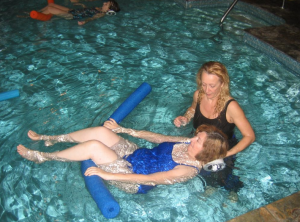 At the moment, Aqua Yoga is one of the hottest new yoga trends according to an ABC report recently, and this means that pioneering Camella Nair, who has been teaching her Aqua Kriya Yoga program for over a decade, is busy taking aqua yoga out into the world. Students who may not have thought yoga was accessible for them, as well as the yoga community that has been concentrating their classes to a sticky mat, could do well to become a part of this deeply therapeutic modality. Check out the Aqua Kriya Yoga website for classes in your area, or consider expanding your training and start teaching yoga in the water yourself. 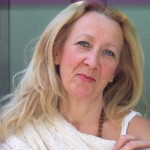 One Response to “Aqua Kriya Yoga 101, by Camella Nair”