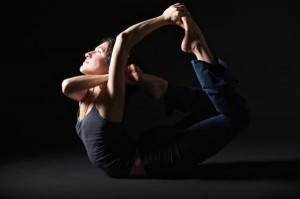 Leah: How did you first find yoga?

Gina: I had a lot of mystical experiences as a child, so I feel like I had always been drawn to yoga.

My start in the physical practice was in 1999 when I was working as a fitness teacher at a corporate gym. The gym had a 6-hour yoga-based fitness training program that they offered to all of the instructors. Though the training itself barely scratched the surface, it totally turned me on. I felt I had found what I had always been looking for.

I was so enthusiastic that right away  I started going to Peachtree Yoga Center to learn more about yoga. Within a couple of months, I began the Teacher Training program there. I started teaching right away too through the program at the gym. It was kind of unusual to begin teaching as such a new student to yoga. I don’t know what I was actually “teaching,” but that’s just how it went. I feel like I was just kind of swept into teaching and then it ultimately became what I was meant to do. I was certainly dedicated to my studies and practice from the start.

Leah: How did you first find Anusara? I see on your website that you went to your first Anusara workshop in 2001 – what drew you to that?

Gina: This first Anusara yoga workshop was with John Friend himself! It was so full of Grace that he actually came to Peachtree Yoga Center for a workshop in 2001. I was teaching there and very comfortable in their community so I wouldn’t have branched out to try something new at a different studio or city at that time. I feel it was most auspicious that John Friend came to where I was.  I was so lit up by John and the practice was so totally fun, powerful, and transformational for me. Right away, I started to travel around the Southeast to  as many Anusara yoga workshops as I could and to see John as much as possible.

Leah: What is it about John Friend? I’ve never met him, but I know people are just drawn into him. Can you possibly describe him to me?

Gina: He just has such a presence. If you’re in a workshop with literally hundreds of people, and you’re on the furthest edge, it still feels like he’s talking right to your heart. His knowledge of applied biomechanics is masterful and regularly students experience radical transformation on all levels through his teaching. He doesn’t set himself up as an unapproachable teacher but is right there with you. I experience him as a total servant of Grace, a clear channel, very full of love. He just wants to help heal and uplift everyone.

Also, he’s funny! We’ll be having some very serious and heart-opening moments, and out of nowhere, he’ll make us laugh. In that way the discipline and depth of the practice stays light-hearted and laughter is such a powerful way to move energy

How did you get into teaching the Anusara Immersion? You started in 2008 and have already grown to three locations!

In 2006, I became the first certified Anusara yoga teacher in the state. Only certified teachers can teach Immersions, and after a couple of years of teaching Anusara yoga around the city I felt it was time to offer it to the community here. I was surprised actually by how much interest there was in it! I was like, “really?” [laughs]. I was really humbled – much of the interest was from the buzz of Anusara yoga generated by John and all the other amazing national Anusara yoga teachers – I felt really blessed, even lucky, to be able to serve the growth of Anusara here in that way. I didn’t set out to try to teach all over the city or to become this “yogalebrity,” I just wanted to share the Grace-filled teachings of Anusara yoga.

This year I’ll begin the 4th year of Immersion at Atlanta Yoga. After setting dates for this one Isvari at Kashi Atlanta Urban Ashram suggested I do one there. It seemed like the natural progression to branch out and serve more students in the city.. Also, Debbie at Decatur Yoga and Pilates had previously invited me to do the Immersion there so it seemed like the perfect time to offer one there too and make it a city-wide Anusara Immersion.

What is the Immersion in the teacher training and certification experience?

The process includes taking 100 hours of Immersion – all three parts – and then, separately, going onto Anusara yoga Teacher Training. Participating in Immersion is about deepening your own practice whether or not you intend to teach. Immersion 1 is a broad overview of the philosophy and principles of Anusara yoga. Parts 2 and 3 progressively dive deeper, including the study of the Yoga Sutra of Patanjali and the Bhagavad Gita from a Tantric perspective.

Once you’ve completed 100 hours of Immersion and 50 hours of Teacher Training you can then be considered for becoming an Anusara-inspired yoga teacher. Going onto to the Anusara certification process requires 50 more hours of Teacher Training plus 300 more total hours of Anusara yoga studies. Both Anusara-Inspired yoga and Anusara yoga certification are licensed through the Anusara organization. Both levels are recognized by Yoga Alliance at the 200 and 500 hour level respectively.

Going all the way to Anusara yoga certification is no doubt rigorous. You definitely have to want it! I think it’s smart that Anusara yoga offers the Immersion as a way to steep in practice without learning about aspects of teaching yoga if that doesn’t call you. We want the practice to be established first, and then we’ll consider teaching from there.

Parts 2 and 3 of the Anusara Immersion will continue at Atlanta Yoga beginning in September.

4 Responses to “Are You Ready to Be Immersed? An Interview with Gina Minyard”