In 1984, Madonna released the song “Material Girl”, a pop sensation that was also a commentary on the object and money focused world of 80’s America. You all know the words, “They can beg and they can plead/But they can’t see the light, that’s right/cause the boy with the cold hard cash/ is always mister right/’cause we are living in a material world, and I am a material girl….” 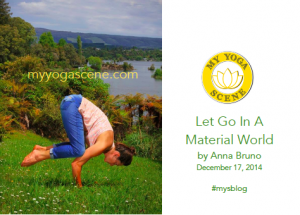 In the more than thirty years since Madonna’s hit little has changed. People still use objects, gifts and money to show they care, rather than emotions. In turn, the objects in our lives in some cases become more important than the people who gave them to us. Talking to a friend the other day, I was struck by how much the objects in our lives serve to define who we are, how we see ourselves, and how others see us.

The friend in question is dealing with the aftermath of a traumatic brain injury and is now being forced to reconcile with giving up the toys- a downhill mountain bike, a whitewater kayak- that previously played a major part in her life. This has been difficult because selling a bicycle means acknowledging the unlikeliness of returning to a sport she loves. As a result, she is forced to give up not just her bike, but also the part of her life and identity that accompanies it. For C, and for many of us, the objects in our lives elucidate to those around us the image we project of ourselves. It is a common joke in the whitewater industry that most paddlers drive either a Subaru or a Tacoma, complete with Yakima or Thule racks. Seeing others with boats or bikes or boards on their cars, or yoga mats under their arms is akin to being part of a small secret tribe. These things send off subtle cues that shout to others, “I am involved in the outdoors, I do what you do, I do cool things, therefore I am a cool person.” Just this past week I bought my first surfboard. In congratulations, my friend Josh texted me saying “you’re a real surfer now!” and I thought, am I? Is that what makes me a real surfer? Even more broadly, how many of us hold onto clothes that no longer fit in the hopes of once more squeezing into them, or simply for the sentimental value of the good times they held, even though we know we are unlikely to ever wear them again? 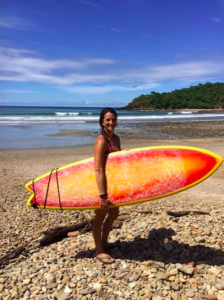 Within the foundations of yoga exists the concept of Aparigraha, which loosely translates to mean non grasping or non-attachment. It is an interesting concept and one that can be interpreted in many ways. Traditionally, aparigrapha can be understood in relation to a fear of death; the grasping onto life inspired by the fear of leaving this world and all the reluctance to leave what we are and have in it behind. Within the Hindu belief of re-incarnation, the concept of aparigraha makes sense. Why be attached to this life, this body when it is your soul that is eternal. If you believe you will be born again, why does the shell that houses your greater self matter? When we are longer afraid of death and have let go of the importance we attach to our physical selves, our spiritual selves are able to transcend, ultimately reaching enlightenment. The question is, how can we continue to make aparigraha relative to our lives today, whether or not we believe in re-incarnation or are working towards enlightenment. This question is especially important as we come into the holiday season, a time when consumerism and the importance we attach to material goods is at an all time high.

At the heart of aparigrapha is the concept of non-attachment, of letting go of our presumed importance of temporary objects, our physical bodies included. For C, this could mean remembering that a bike is just a bike. It also means believing that when the time comes, and she is healthy and hopefully able to ride again, there will be a new bike, and it means believing that her soul, her love of what biking gives her will remain unchanged. For ‘gear whores’ like myself or many of my friends, aparigraha can mean letting go of the material object, letting go of the image of something in favor of the essence of it and the emotions it invokes in you. Long before I owned a surfboard, I was captivated by the movement of waves, the calm feeling of being out past the break, the rush of dropping in, the satisfaction of being tired and happy at the end of a session. To me, this is what makes me a surfer, board or no board.

Aparigraha can mean even the letting go of an image of yourself, cleaning out closets to give clothes to others who may value them for an entirely different reason. This holiday season, I encourage you to practice a simple form of aparigraha, of a letting go of the importance we so often place material goods and items exchanged rather than emotions or time together. Where I work, we have begun the tradition of celebrating someone on their birthday by sharing something we appreciate about them. It is this mindset that we can try to take into the holidays as we redirect what we place importance on in our lives. Let us place value on the people and experiences in our lives that bring us joy, rather than objects. Share yourself with those around you through the gift of your full attention, and the appreciation of each other and our time together. 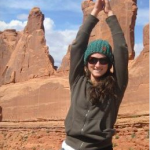 Anna Bruno is certified yoga instructor through the Kripalu school. A water baby, Anna loves to spending time on rivers and the ocean. Not-so-guilty pleasures include reading in hammocks, dipping dark chocolate into red wine, and morning coffee with friends. Anna’s favorite place to practice yoga is outside, as long at it isn’t raining. Anna has spent the past few years teaching yoga as well as English literature for World Class Academy. When not teaching English or yoga, she can be found traveling the world with a kayak, yoga mat, running shoes and a hoola hoop. More information about Anna here.

4 Responses to “Let Go In A Material World, by Anna Bruno”