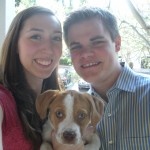 I got a really cool suggestion from a reader to do a post about men in yoga. I am certainly no expert in this area, and never will be. I’m the epitome of the ‘yoga’ demographic–female, young, bendy, and ever-so-slightly bent on Eastern spirituality. Further, I thought it would be cool to learn what a non-initiated, whisky-drinking, financial professional, “dude’s dude” would genuinely think about yoga. So I asked my better half–“will you take a yoga class and share your honest impressions?”

And with a willing spirit, he took the challenge!

Boxing and yoga should not mesh well together. They appear to be polar opposites, with opposing moralities, and very few people who cross train in the two disciplines. I have been training for over a year at Delgado Boxing in Sandy Springs and for those of you who have never tried anything like that, it is a “fast, intense, go-go-go, 2 more, push harder, reach down deep” kind of atmosphere (all while learning how to fight). I have grown to love it a lot, to even take pleasure in that dank, sweat smell of a boxing gym. And that is why my girlfriend Leah thought I might be the perfect person to share the experience of a guy’s first time in a yoga class.

I was pretty surprised at the nerves I felt on the ride over to Peachtree Yoga. Yogis are a very generous, beautiful people, but you guys speak a different language from us civilians. It ostensibly appears to be a combination of Hindu spirituality, anatomy, and certain attitudinal elements of the 1960s. I am sure everyone feels a little hesitant when walking into a new culture though.  I really didn’t want to disrespect the tradition, or disturb anyone’s chi by falling on my face. I just wanted to observe and experience, not try to make some sort of statement by being there.

That was basically my initial goal – not to fall on my face. 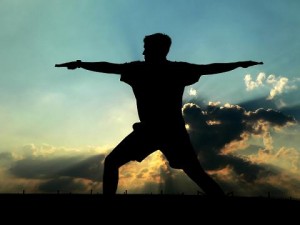 So class gets going and everyone starts settling into their own poses (none of which I will attempt to spell, I promise). Some sweat forms over my shoulders, my thigh muscles loosen up, and my back slowly begins to agree with my wanting to twist it. I did not expect this, but the room slowly started to melt away from my consciousness. I kind of stopped caring if anyone was looking at me. At moments, there was only our teacher’s disembodied voice and myself. I can honestly say that I haven’t experienced anything quite like that particular feeling before. Don’t get me wrong though, it was pretty damn hard.  There were also moments that my legs starting shaking and I wished my yoga mat was made of corduroy to stop my slipping.

My takeaway moment occurred in the final portion of the class though, during the part where everyone lies down quietly (once again, I will not attempt to spell the Sanskrit name). As I laid there, with my eyes closed, I felt like I was underwater. I was there in the room, but my mind had slipped below the surface of the water, becoming exposed to an internal ocean which you aren’t aware of everyday.  In what could have been 2 minutes or 2 hours,  we got back up and class was over.

I wasn’t ready for it to be over though!

I had discovered the tiniest, little glimpse of something…..real. I can’t quantify it or explain it very well, but I understand why yoga has existed for thousands of years. There is definitely something real beneath our surface that I suspect we are all searching out. I do lose my conscious self in boxing, but that is more of a fast twitch focus for me, where everything else is moving at half speed and I have to move faster or hit harder.  Yoga has a quietness about it, a soft dignity, that allows ever a first timer like me to listen to my heart. To put it simply, I just felt like a better, truer version of myself after my first yoga class.

I am grateful for the opportunity to write to all of you, and I can’t thank Peachtree Yoga and Leah enough for setting this up. Get your gloves up everyone, and Namaste.

3 Responses to “So a boxer walks into a yoga class….”