There’s an especially elegant and uplifting yoga pose that, in my opinion, has a rather unfortunate name. It’s a backbend commonly referred to as “rockstar,” and while it’s one of my favorite poses to practice and teach, its name is just one small part of a long list of things that seem to perpetuate an increasingly widespread and unsettling idea of yoga as a performance or a showcase of one’s physical and aesthetic allure. The culture of many yoga studios these days and the underlying philosophy they embrace is one not only of flashiness and image-consciousness, but also of a preoccupation with yoga as group fitness, embellished with the occasional cheerleader-like motivational or inspirational platitude. I’ve been in many a class over the years in which a teacher’s cueing of the aforementioned pose was followed by a lavishing of empty praise on students that usually went something like “Oh my God, you guys are literally rockstars right now! Sooooo beautiful…”

While there may have been a brief period of time in my years of practicing and teaching during which I got swept up in the glitz, glamour and go “H.A.M.” (hard as a motherfucker, for those of y’all not familiar with hip hop slang) culture filled with $130 pants, 30 hot power classes in 30 day challenges, all day yogathons, and handstand-selfie-a-day social media madness, I have absolutely no desire these days to be a “rockstar” on my mat. After suffering wrist, shoulder, and hamstring injuries from my recklessly stubborn quest to master all of the arm balances and inversions and practice them whenever and wherever I could (a.k.a. show them off), I now realize and embrace the importance of the old “less is more” cliche that so many well-intentioned and highly skilled instructors are sadly not applying to the classes they teach. We’re practicing yoga in a culture that largely pushes us to do more, achieve harder poses, take more classes and spend more money so we can ultimately achieve not those elusive goals of inner peace and self-acceptance, but that more superficial, external sort of radiance that comes with looking really hot in your overpriced hot pink luon pants in a potentially unsafe and poorly taught backbend.

Yes, there are many yoga postures that look and feel absolutely beautiful, and the level of calm determination and persistence that goes into finally being able to take on these shapes is quite admirable and can often give practitioners a strong sense of accomplishment and a more positive self-image. There is certainly a place for the more “fancy pants” postures such as advanced backbends, binds, and arm balances, but I don’t think it’s in a sweaty, overcrowded room packed with 100 yogis of vastly varying levels of ability and experience, with loud hip hop blaring to boot. Too many teachers and studios out there are pushing these postures and these high energy, fitness oriented classes on the general public in a way that lacks concern for safety and body image, and to add insult to (sometimes literal) injury, they pour enthusiastic yet superficial praise upon their students, motivating them to practice like a “rockstar.” 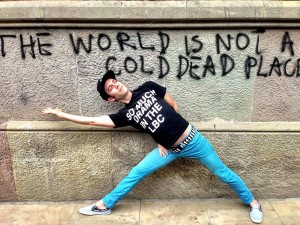 I don’t overuse praise or adopt a fake singsongy voice with the elementary school students I teach, so I certainly would never do these things when teaching adult yoga classes. Those verbal tics have always made me cringe, and they’ve certainly deterred me from returning to certain teachers’ classes. I love a good challenge and will happily bust out the occasional arm balance in class mostly because of the exhilaration and strength it allows me to connect with. But if the overwhelming thrust of the class is to physically exhaust the body with excessive amounts of uptempo movement in preparation for a pretty unattainable pose, while the usually skinny twenty-something teacher tells us how much we “rock” or how “amaaaazing” we are, I most likely won’t decide to return to that particular teacher or class.

It’s great that this powerful physical and mental practice has become so accessible to the masses in recent years and that so many practitioners of various ages and walks of life are able to benefit from the many positive and influential teachings that yoga has to offer. But what’s not always so great are these factory-like studios that churn out hundreds of new teachers each year who often go on to disseminate the same superficial, fitness-and-image-oriented philosophies with the same cheerleader-like teaching practices that they absorbed in their training.

Instead of enticing students with the allure of flashy postures or a nice booty and motivating them to attain a “rockstar” or (god forbid) “goddess”-level practice, maybe we as teachers can someday win them over with good old fashioned breath, alignment, and a safe-but-strong, meditative style of movement that helps them reconnect with their actual selves instead of with some weird image of Mick Jagger or Stevie Nicks in a backbend (sorry I’m not sorry for giving you that mental picture). Because when I want to take in the energy of rockstar, I’ll see an actual rock band at the House of Blues, but when I go to a yoga class, I’m there to be myself and get grounded, not to rock out. 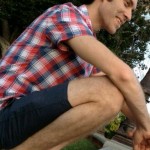 Michael Mann recently transitioned away from a full-time career teaching vinyasa yoga to begin graduate studies in Journalism. His teaching schedule has dropped to part-time status, and his personal practice has simplified quite a bit in recent years. These days he’s less about that chaturanga, and more about being gentle, mindful, and authentic in the larger practice of everyday life (but not without a healthy dose of sarcasm and irreverence). While he certainly enjoys a good green smoothie, he has not and will not be persuaded by those preachy vegans on his social media feeds to abandon his love for bacon, red wine, and gummy candies. More info here.

7 Responses to “Ground Down Or Rock Out, by Michael Mann”