I sat in my best friends house looking out her window on that Wednesday afternoon and said to her:

“You know what is so weird about this rain? It doesn’t really stop. Its just raining really hard with no break.”

“Yea I know” she replied. “Its just like back on the east coast. Its so strange for here in boulder.”

I was taking refuge in her home because the flood—the emotional flood was already happening in my own home. I was deep in the process of wedding planning and moving preparations and so emotions were at high tide already at home with my husband.

Even earlier that day, at my office, a client and I were talking about how strange it was to see so much rain here. It had been raining since Sunday. 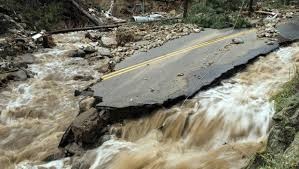 The first day of the grey, cool, and wet I was in love. I am from the east coast, lived in Vermont for a long time and have a special affinity for the cool wet and grey weather. My friends joke that it is because it lets me be all melancholy. My friends are right. There is a strange energy in boulder. It’s very sunny. It’s very sunny all of the time. To be honest, it’s exhausting to have penetrating sun at altitude all the time. It’s exhausting because it is so damn beautiful you never want to work and just want be outside doing activities. It also sets the precedent for the multiple workouts a day syndrome so common here in boulder. We can’t help it. Its just so nice out.

So when we do get a break because it is cold, rainy, and grey I rejoice! I turn my fireplace on and do yoga at home for multiple hours on end. I suppose that massive amounts of exercise thing has no bearing on the weather after all.

So the rains came. They came without remission for days. The creeks started to rise and weather reports warned of flash flooding in the immediate zones by the creek. Basements had already filled by Wednesday evening and washouts in the mountains were already immanent.

Then Thursday came. Thursday was another day without a glimmer of sun and persistent rainfall. My client cancelled because they did not want to come up with some of the flooding. On Wednesday night when they rang to let me know I thought: “hmm ok, I am not sure its really that bad.” By Thursday late morning, though it was pretty clear that , indeed, it was bad. 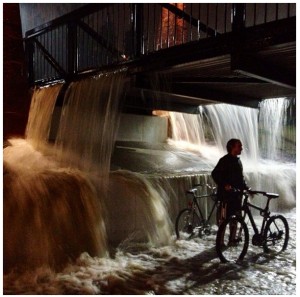 People want to know what it was like in Boulder during that time. All I can say over and over again is that it was weird. It was strange to be on a street that was completely fine and dry and then have our main road Broadway be flooded out. It was bizarre that my friend’s street, one below mine was a raging river while my house was totally dry. I mean bone dry except for the wet and mud brought in by boots.

I also saw masses of people walking around by the creek path underpass near Broadway. Lots of people were taking pictures and I saw many people reaching out in conversation with others which I do not always see every day. I saw many people going out into the shit and helping with their hands and not just their thoughts.

When I was at my friends house helping her and her husband with their futile effort of shoveling water she told me that most of her friends extended words like “sending you dry fairies” and that her husband, an engineer, had friends who all came over with wet vacs and pumps and got down to work. Both being yoga folks ourselves she and I had a good laugh, commenting on how much we wanted to go to yoga and then kept on fighting the water.

I want to say this for a moment of soapbox if you will indulge.

I can tell you that all of the time on the yoga mat and all of that time meditating is not going to bring someone’s house back. I’ll be blunt and quick with this to lessen the blow. Unless you are willing to get dirty in the shit of life and be physically helpful your yoga in my opinion, is not working hard enough. Yes prayers, intentions, and positive affirmation—all of those are important. I am not advocating for giving that up. Rather, I advocate that all the time. Often times the only thing left to do in crisis is pray.

Lets be honest, the prayer is as much a self-serving practice for psycho spiritual self-soothing as any other self-care technique. The act of putting on your boots and going to trudge in the mud is not better than the former, but it is necessary. Sometimes it is more immediately necessary than sending thoughts of dry floors. Yoga is as much about being practical as it is about being metaphorical. Yoga urges our practicality all the time. Why would you put your foot there when you can put it here and the pose opens? Sort of like that you know. 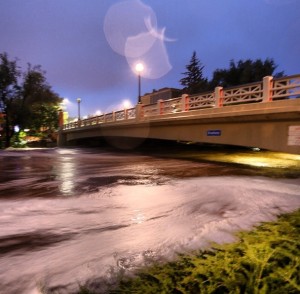 I saw many of my yoga friends pitch in at very practical levels for our community while they continued to teach their own classes. I saw people incapacitated by the amount of work that needed to be done. To be clear I am not downing this behavior at all. I get it. Our town incurred a traumatic natural disaster. That is present at every layer of our existence here. It is present personally, it is present in the city infrastructure, and it is present communally.

I saw many people walking around both in the days during the flood and post flood with that wide glossy eyed look of shock. The whole city was stewing in a thick brew of shock. I felt it on the street, at the store, and in my yoga class. I can say this is getting better. People are returning back home to their bodies in a real way and life is coming back together. Still there are many whose lives are far from normal and routine by any means. This repair both externally in the towns and internally in our nervous systems will take time.

It seems as though this area has been called to wake up in a new way. We pray a lot for rain because we are notoriously dry. Well the rain gods seemed to have listened ten fold and sent a message along the way. I do not know all the meaning of this disaster. Nor do I wish to jump to meaning making just yet. Not while people are still recovering. Not while we still need to shovel the shit. Not while we are still needing to show up for each other in very practical ways. The day for taking notes, reaping lessons, and making meaning will surely come. When it does I hope all of us listen deeply.

My ears, heart, and mind are already attuned to considering the back-story of natural disasters such as the no longer immanent climate change but rather PRESENT climate change. I am already considering how spiritual practice without rooted, grounded, and of the earth as part of the town presence is just as futile as shoveling water. I am waiting, listening, and helping as I do those.

I will share personally that in the flood, as I mentioned previously, my house was dry. I held my normal yoga classes at my home, which felt like a true gift to the community who could get here. I did have some major inconvenience with some clients rescheduling and two workshops needing to be moved around. Lastly, I lost my wedding venue to the flooding . So 3 weeks before the wedding (our wedding was the 6th of October) I had to find a new place. Actually, that is all patty cake compared to what some of my friends experienced. I am grateful and lucky. Though the rains made some of my personal life a pain in the ass, I am blessed. 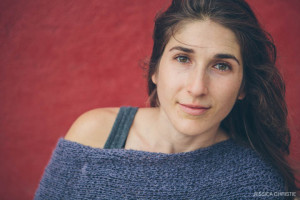 Livia has been called a mystic and a thug because of her unapologetic disinterest in fluff and woowoo combined with her unparalleled passion for discovering more TRUST, HONESTY, and TRUTH in ourselves, each other, and in this planet. She is a counselor, yoga teacher, writer, and entrepreneur. Her work helps students and teachers of yoga grow their ranges of motion and emotion through steady asana practice, somatic education, and body centered mentorship/counseling. Livia bridges the gap between yoga and modern psychology, by advancing modern yoga culture to encompass both greater psychological health and re-inspired ideas of ancient yogic wisdom. She is the creator of Applied Psychology for Yogis; educational programs bringing essential somatic psychology tools to dedicated yoga students and teachers. Her digestible classes, workshops, trainings, and mentorships leave students and clients empowered, ignited and pushed right up to the edges of their own progress mentally, physically, spiritually, and emotionally.

2 Responses to “Getting Off the Mat and Dirty in the $h!t of Life by, Livia Sapiro”