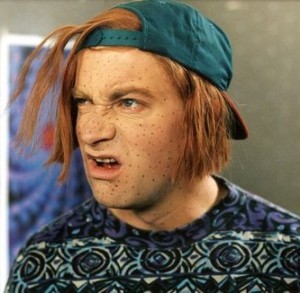 Recently I’ve been going through what I can only describe as a yoga burnout. It started with a couple of nagging injuries, and then progressed when I found myself driving an hour and a half through traffic to get to a yoga class (“why do I do this to myself?”), Ask the Yogis was a MAJOR flop, and I’ve had lingering annoyances with half of the yoga classes I’ve attended in the past month.

Then my website crashed. Was all of this a sign? Were the yoga gods telling me that it was time to roll up my mat forever? That I’m a HUGE sham for even thinking I could have a shred of opinion on yoga, worthy of being listened to by ANYONE??

I figured I needed a massive change, perhaps to get some perspective. A change of attitude. A different way of seeing my yoga practice. So I battened down the hatches, went into hiding both digitally and physically, switched yoga studios, started meditating at home and in my office, and waited to see the changes.

I hoped for a really grand enlightenment where everything stopped annoying me and I re-found my undying, passionate love of yoga.

But then I found myself in a particularly sweaty power yoga class, where at some point there was fluid running from my eyes, nose and brow simultaneously. Yes, I was crying. Not because I had some life changing breakthrough. Quite the contrary! I was just overly frustrated of doing so many downward facing dogs. “Come on, does this pose have to be the transition pose for everything??” And then I was frustrated that something so simple bothered me. “Where’s my emotional and spiritual center? Why am I so attached to this one pose? Why can’t I just ‘let go’? Isn’t that the point of yoga. And then the tears came. Because I couldn’t let go.

It felt better to be holding on to this frustration and letting it out via tears rather than applying the meditation principles yoga teaches.

Stupid yoga and all of its downward facing dogs. And my wildly apparent immaturities.

While I still haven’t had my moment of clarity about why I’m so irked by my relationship with yoga now, I did realize:

I’ve enjoyed the past three years of my yoga practice as an exploratory exercise, constantly learning new poses, breathing techniques and philosophies. It’s as if I’ve been in yoga elementary school where the lessons are supposed to make you feel accomplished and excited. Class has just been a matter of showing up to get some powerful benefit and feel great.

My current state, however, is that I’ve walked into yoga high school, a know-it-all, a pimply in-betweener.  “I’ve done this pose a million times.” “Breathe like that? Done.” “Meditate? I can do that shit on cue!” And when we do downward facing dog more times than I like, I get moody and pitch a fit. Or cry. Depending on how sweaty I am.

I’ve approached a new part of my yogic journey, and it’s not as easy and fun as the first part. It’s going to be more growing. More detachment. More meditation. More deep exploration of my very flawed self. More suppression of the ego.

I guess, that in order to really come out on the other side, I just need to  keep going to class, keep growing, be aware of my immature little yoga moments and give myself a break. Teenagers don’t become adults in a day. But I’m working on it.

And taking advice like it’s going out of style. Thoughts?

10 Responses to “My Spiritual Self is a Teenager”